Staff Spotlight on Holly Winters | Attitude Makes All the Difference 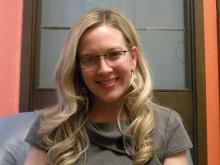 Holly Winters, 100/200-Level Adviser and Administrative Coordinator, and SPS’s newest staff member, knows how to run an office. Her years of retail and office management have groomed her for this aspect of her position, which she has held since April of 2013.

The icing on the cake for SPS is Winters’ passion for and commitment to working in academia, specifically in a department that emphasizes bilingualism and Spanish language education.

Her direction wasn’t always as clear as it is today. “If someone had told me years ago that I would be a Spanish major and educator, I would not have believed them,” laughed Winters, who dropped out of college because she “didn’t fit into the system.”

“Working and being out in the world was valuable,” said Winters, who in eight years at Blockbuster, held every position including District Manager. “It allowed me to develop emotional maturity and professional experience.”

Inspired by a hard-working Mexican co-worker who spoke Spanish with customers, Winters began studying the language. “Until she worked for us, I didn’t realize we had that many Spanish-speaking customers,” Winters recalled. “Watching this woman in action awakened my understanding of diversity and how relevant Latinos are in Seattle.”

After two years of Spanish classes, Winters traveled to Buenos Aires, Argentina and studied at a private language school. The cultural immersion experience and her increased Spanish solidified the start of an academic career. Winters left Blockbuster to go on educational trips to South America (Montevideo, Uruguay and Salvador da Bahia, Brazil).

“I knew what I wanted to do, what I needed to get there, and I was motivated,” said Winters who attended community college and transferred to The Evergreen State College. Winters completed her undergraduate education in Latin American Studies as an exchange student at UW’s Jackson School of International Studies.

After completing her master’s degree, Winters began an exhausting search for a teaching job precisely at the time when World Language departments were experiencing huge cuts. I wanted to tell people: “I’m an awesome teacher! I can make it fun! I guarantee you will love my class! Just give me a chance!” But the jobs weren’t there.

Resolute, Winters taught and tutored privately while applying for every entry-level job there was in academia that required bilingualism. “I was determined not to deviate from my path,” she said.

Winters applied for the SPS job online the day it was closing and was hired one week later. “After clicking into the void for two years, it was wonderful to actually get a call!” she said.

“This job is perfect for me and my life right now,” said Winters who in 2012 took on another job: Motherhood. “It is gratifying to be able to use my education, skills, and experience and to work with a community that appreciates the relevance of Spanish in the U.S.”

Winters spent the summer making the main office welcoming and inviting, a hub for the department. “My education and work experience have prepared me to be a better coworker and colleague,” said Winters. “A positive attitude is critical. You get out of it what you put into it.”