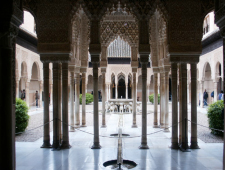 Twenty-seven UW students reached Cádiz on January 12, marking the beginning of the department’s thirty-fourth semester-long program in the city thought by many to be the oldest in Western Europe.

As the new group of students begins their five-month adventure on the coast of Southwestern Spain, fall semester returnees are readjusting to life in the U.S.  According to Rita Serghini, Resident Director of the Cádiz Program (and UW graduate in Spanish & International Relations who participated in the Cádiz program), the fall semester was “awesome!”

The group of forty-nine students was dynamic and inquisitive. “They not only soaked up the sun and enjoyed the endless sandy beaches, but,” according to Serghini, “were open to change and accepting of cultural differences.” Many quickly made local friends, either through their own initiative or through language interchanges with local University of Cádiz students, which included potlucks, holiday events and activities that focused on celebrations and traditions from both countries. These friendships were fundamental to the students’ experience and facilitated their integration into the gaditano community.

The end of the semester was a tear-filled time for many as they bid goodbye to their host families and friends, knowing they were leaving behind people who had forever changed their lives, and with whom they had established close and powerful connections.

Traveling to Córdoba and Granada in October, students experienced the magnitude and grandeur of both the Mezquita and the Alhambra.  The Mezquita tour, led by ever-faithful guide, José Julio, exposed students to the world’s third largest Muslim mosque, remodeled inside to include amongst other things, a Catholic Cathedral: a true juxtaposition of religious cultures. Equally fascinating was the, Alhambra Palace, the last Islamic stronghold to fall to Catholic monarchs, Ferdinand & Isabella, in 1492. Students toured the botanical gardens, visited the Alcazaba, the Palacio de Carlos IV and the Palacios Nazaríes, where they saw the exquisite Patio de los Leones whose fountains and gently flowing channels of water serve to connect the various patios, creating a sense of unity and tranquility. 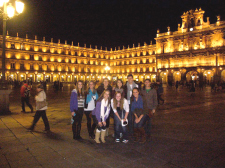 In November, an excursion to Salamanca with stops in Cáceres and Mérida, gave students an opportunity to roam the medieval town of Cáceres as locals geared up for their annual medieval fair. In Salamanca, home to Spain’s oldest university (founded in 1218), students toured the casco antiguo (old town), visiting the Plaza Mayor, the old and new Cathedrals, and the famous university with the “rana de suerte” (lucky frog) hidden in its façade. Lastly, the impressive Roman ruins and the strategic importance of Mérida opened students’ eyes to what life might have been like in the Iberian Peninsula during the Roman Empire. Each semester students in Cádiz select four or five 300- and 400-level courses (20-25 credits) taught by University of Cádiz faculty and designed to fulfill Spanish major and minor requirements at UW. Spanish 301, 302, 303, 406, three core courses (321, 322 and 323) as well as literature, linguistics, and cultural studies electives are offered fall and spring. More advanced students are encouraged to enroll in at least one regular University of Cádiz class. In addition to formal course work, they participate in a variety of extra-curricular classes including photography, cooking, surfing, 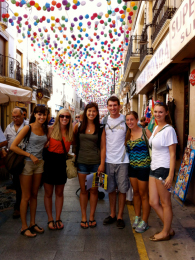 classical Spanish guitar, and dance. Some choose to pursue salsa while those most inspired by the emotion and passion of flamenco culture opt to take a flamenco or sevillana dance class.

Some students volunteered at a local daycare, teaching English to the children through a variety of play activities. Others offered private English classes as a way to supplement their spending money. These classes provided a valuable experience for those who chose to undertake the additional responsibility.

All in all the semester was a resounding success. Many commented on how much they had changed in the sixteen weeks they were in Cádiz. By mid December, as the nine year-long students were looking forward to a five-week vacation, those in Cádiz just for fall semester were wishing that they could stay on and are now eagerly looking for ways to come back. 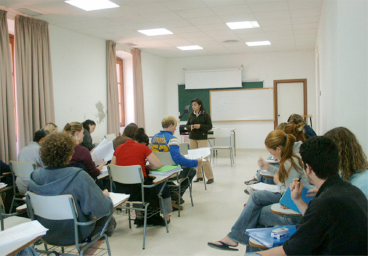