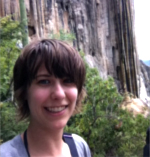 Emily Thompson isn’t in a hurry. She likes to take things slowly. But she doesn’t exactly sit still either.

A 2008 UW graduate with degrees in English Literature and Spanish, Thompson is currently pursuing an M.A. in Hispanic Studies. “My goal is to be a translator,” she said with conviction. “That is what I really enjoy.” Thompson appreciates the time it takes to sit with a dictionary and find exactly the right way to say something. “It’s so much more satisfying than quick conversation,” she reflected. “Poems allow one to pay attention to sounds, to feel them and to include that in the translation.”

Following graduation, Thompson traveled to Calatayud, Aragón, Spain where she spent a year with the Spanish Government’s Cultural Ambassador Program, teaching English in Spanish elementary schools and serving as a cultural helper to an English teacher.

Next she began the two-year M.A. program at UW and will be finishing her course work this spring. Between years, with funding from the David William Foster Fund, Thompson studied in Oaxaca where she lived with a family and took private Spanish classes at the Instituto Cultural Oaxaca. “My instructor, who writes for a newspaper in Oaxaca, was very knowledgeable about literature,” said Thompson. “We read short stories and periodicals and later I translated some of his articles.”

The cultural aspects of the experience were also invaluable, according to Thompson who took full advantage of the afternoon workshops in dance, weaving and ceramics. “The ceramics instructor was an indigenous woman who rode the bus down from the mountains, bringing black clay unique to that region,” Thompson explained. “I learned how to hand form the clay using scavenged tools and we baked the pieces over a wood fire,” she said. “The cultural exposure definitely enhanced the language learning.”

Last October, Thompson attended the American Translators Association Conference in San Diego along with 1,600 attendees from all over the world. Leigh Mercer, graduate program coordinator, suggested the Gary Schmechel Fund to help Thompson pay the steep attendance fee. “My roommate was the President of the Brazilian Translators Association,” Thompson said. “The wealth of information about careers in translation was tremendously helpful,” she said. “It was very worthwhile.”

Currently, in addition to her course work, Thompson is teaching and writing her thesis on Elizabeth Bishop, an American Poet originally from Nova Scotia who lived in Brazil. Thompson is grateful to her advisor and mentor, Edgar O’Hara, whose rapport and guidance have been inspirational.

Thompson recently translated a book of poems by Blanca Varela, a Peruvian poet who died in 2009. O’Hara quoted Varela’s poem, Curriculum Vitae, during lunch one day four years ago. Thompson knew she wanted to read more of Varela’s poems but she also wanted to share them with her friends.  She tried a translation of one and ran it by O’Hara. “I knew it must be good when Edgar read it and said ‘Touchdown!’” laughed Thompson. In 2012 Thompson self-published the book, titled, The Dark Humming: Blanca Varela en inglés, with the help of O’Hara and the Instituto Cervantes.

When she finds the time, Thompson enjoys movies and musicals. She was eagerly anticipating seeing Fiddler on the Roof on Christmas Day. “No time for much else during grad school,” she said. But that’s okay with Emily Thompson because she is studying, translating and doing what she loves, no matter how long it takes.