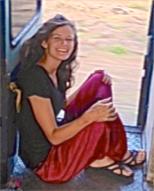 Ashley Davis is on the move! We caught up with Ashley, an August 2012 graduate in Spanish and International Studies (Development track), in India of all places!

Just prior to graduation, Davis took a Spanish film class taught by Cuban film director, Miguel Coyula. The final project was to make a short film. “It was intimidating because we didn’t have a background in film,” explained Davis, “We were just Spanish students!” Although out of her element, Davis credits Coyula for helping through every step, from storyboarding to filming to editing. Davis said that her film, about breaking out of one’s daily routine at UW and dancing through Red Square to class, “was really fun to make because I literally stood in Red Square with a sign and recruited passersby to dance.” Davis was delighted by how many volunteers there were. Despite Davis’ humility, her teacher was impressed with the final product. In an email to the department, Coyula wrote, “She did a tremendous job with the film and her essay truly represents both aurally and visually. I might add she has a terrific sense of rhythm in the editing, which is unusual for someone who hasn't done a film before.” To view the rough-cut second half of Davis’ film, go to http://www.youtube.com/watch?v=sxo-1HznzeI.

Davis made another film about a tomato that gets made into Pico de Gallo. “It’s from the point of view of the tomato, thus making it a horror film,” said Davis who was inspired by Pacheco’s poem Nueces, in which Pacheco takes a seemingly mundane activity, picking and eating nuts, and describes it in a way that makes it sound strangely barbaric. “My movie ended up being quite a bit cheesier than the poem,” laughed Davis claiming she got carried away with epic music, “but hey, what can you do? I’m a novice! To view La Muerte Roja, go to http://www.youtube.com/watch?v=ousQvamMhRs&feature=youtu.be.

Filmmaking isn’t Davis’ only claim to fame at UW. To receive honors credit in her Spanish translation class, Davis translated La Amiga de Frida by Elena Poniatowska, a children’s book on Frida Kahlo. Davis started with a direct translation draft followed by one that clarified a few unfamiliar idioms. She then restructured the translation so that it flowed naturally in English. “By far the most challenging part is to reformulate the work so that it makes sense in your own language and culture, while maintaining the tone, cadence and context that the author originally intended,” said Davis. The experience gave Davis a newfound appreciation for translation. According to Davis’ professor, Cynthia Steele, “Ashley was an enthusiastic and highly productive member of my Spanish literary translation workshop this summer. The translation she did of Elena Poniatowska’s children’s book La Amiga de Frida Kahlo demonstrated great sensitivity to the nuances of both English and Spanish, as well as to the life of the Mexican painter.”

So, why is Davis in India and not in a Spanish speaking country or in Hollywood making films? “Well, there isn’t a good reason why I am here,” said Davis. “I saved some money during college, and when I found out that a friend of mine was traveling in India, I bought a ticket on a whim. And here I am!”

“But,” she added, “after majoring in Spanish and International Studies, it’s practically impossible not to want to travel!” Davis’ junior year studying in Argentina inspired and prepared her for future travel experiences. Having learned that she could survive and make friends in a Spanish-speaking country she decided to take it to the next level, traveling to a country whose language is unfamiliar. “Hindi is quite a bit harder, and my acting skills have definitely improved!” she said. But the lessons she learned studying abroad also apply in India. “Surprisingly,” Davis said, “a background in Spanish gets you somewhere here, too. There are travelers from Hispanic countries in every corner of the world, and I have met many traveling companions in India because of my Spanish. I have even had to translate here!”

Davis is going to Thailand next, and then visiting former UW exchange students in Japan. Next stop, Hollywood? Stay tuned!