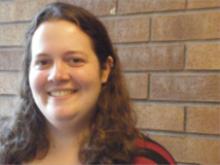 Lani Phillips may be a soft-spoken woman but don’t let that fool you. She knows what she wants, acts on her beliefs and convictions, and is a driving force behind the UW’s León Center in León, Spain.

Phillips graduated from Dickinson College in Pennsylvania with a triple major in Math, Spanish and French. She got her masters at NYU in Madrid and is currently a graduate student at UW in Higher Education and Policy Studies through the College of Education.

“When I returned from Madrid,” said Phillips, “I knew I wanted to work in the Spanish Department at UW.”  Phillips’ mother, like all good mothers, encouraged her to go into business and make more money. But Phillips, knowing what she wanted took a job as a security guard at SAM while waiting for an opening at UW. That first opening came in the Health Sciences where she worked part-time. She hung on, didn’t settle, carved her path until a position opened up for her in the Division of Spanish & Portuguese Studies.

Initially a program coordinator, she served as an advisor to the 100/200 level students. Now as Administrator and Director of Program Development for the León Center in León, Spain, Phillips works with departments campus-wide, enticing them to use the Center for their study abroad programs. “Although the León Center is housed in the Spanish Department,” explained Phillips, “it is actually an Arts & Sciences College initiative. The building in León hosts programs such as the Studio Art Program this past spring.” Other departments that have used the León Center include the Department of English, the School of Business and the School of Law.

Phillips then oversees the financial aspect of the center, working up student use fees based on what she anticipates happening with individual programs. “This is the only job I can think of that would use both my Math and Spanish degrees!” laughs Phillips.  “It’s a first!”

This past summer, Phillips collaborated with CHID (Comparative History of Ideas Department) Assistant Director, Amy Peloff, to run a study abroad experience in Cuba. The program, located for two and a half weeks in Seattle, four weeks in Cuba and one week in Miami, gave students a well-rounded view of Cuban history and the Cuban experience. “Cuba always interested me,” explained Phillips, “because of the ‘forbidden’ aspect. For some reason, there is still a misconception, a fear surrounding Cuba from the American perspective. I wanted to see it first hand.”

According to Phillips, the most important thing she took away from the trip was talking to Cubans in Cuba who had no agenda other than learning about the American students and sharing their personal perspective. “I did a lot of eavesdropping,” said Lani. “I heard a Cuban woman talking to a Spaniard saying that she wanted the same rights to travel and buy a home, but she doesn’t want to leave Cuba or see Cuba become an American territory like Puerto Rico.” To learn more about the Cuba trip, see here.

“I appreciate Tony Geist’s (Chair of Spanish and Portuguese Studies) support of my professional development in encouraging me to take advantage of personal growth opportunities such as this trip,” said Phillips. “It was so gratifying for me to see the students’ knowledge become real.”

When Phillips is not at her desk in Padelford Hall or traveling to León or Cuba, she is studying or watching films. “I love to analyze films,” she explained. “I am interested in techniques used to convey different messages such as imagery, colors, locations and understanding what a filmmaker and editor are doing and why.”

After five years with the Spanish Portuguese Studies Division, Phillips is content.  “I’m where I’m supposed to be,” she said. “I’m happy and I love my job.”