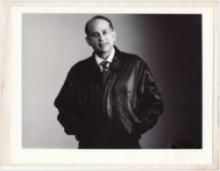 Our longtime friend and colleague, León Bensadon, passed away at 12:51 a.m. on Sunday, November 4, 2012. He was born 64 years ago in Tangiers, Morocco, in a once vibrant Sephardic Jewish community. At an early age he moved with his family to Madrid, where he worked as an electrical technician before joining the Berlitz Schools of Language. From Spain he moved to Venezuela where he managed an import-export business before finally settling in Seattle in 1984. Shortly after coming to Seattle, he returned to school at the University of Washington, earning a BA (cum laude) in marketing and an MA in Spanish. And here León discovered his true passion: teaching. Several generations of UW students bear witness to his knowledge, dedication and enthusiasm as a lecturer in the department, whether it was in first- or second-year Spanish classes, Composition, or Business Spanish.

León and I have been friends since he first took one of my classes in 1990 or 1991, and have remained so to this day. I always appreciated his sincerity, intelligence and human understanding, qualities that made him such an outstanding teacher. He bore his health problems over the last several years with dignity. He will be deeply missed.

Our hearts go out to his wife, Rose Marie Bensadon Quevedo, his daughter Dr. Debbie Bensadon, his sons Mark and David Bensadon, and his daughter-in-law Jessie Bensadon. As León said to me when my mother died, Que sea fin de males.

Donations in León’s memory can be made to the “León Bensadon Memorial Scholarship Fund.”  This new fund pays tribute to León’s passion for his Sephardic heritage and the students he loved to teach.  It benefits UW undergraduate or graduate students interested in working on Sephardic and Ladino studies.  Checks can be mailed to: UW College of Arts & Sciences, Attn. Jessica Carter, Box 354882, Seattle, WA 98195.  Please make checks payable to the University of Washington and indicate the “León Bensadon Memorial Scholarship Fund” in the reference line.  Alternatively, if you wish to contribute by credit card, you can do so at the following link: http://bit.ly/Bensadon